Much of what we associate with the city–asphalt, lights, surveillance, the grid–was developed in response to a variety of oppressive natural phenomena that afflicted early urban settlements. These included the uncertainties of night, smell and disease caused by human waste, and the fear of crime. Although these and other problems began to be identified during the early Renaissance, they were not properly addressed until the eighteenth century, when municipal lighting and sanitation programs were effectively organized and the police became an apparatus of the state.

Despite the many progressive solutions of modern urban planning, fears linked to poor lighting, pollution and crime remain familiar to us today. Although such threats are often real, the media tends to present them to us as terrifying chimeras whose fantastical existence ironically justifies the erosion of public and green space. In many respects, this kind of anxiety may be linked to a latent fear of natural or even supernatural phenomena: darkness, bad smells, strangers, and the historical association of all these with hell and its minions.

Claude-Philippe Benoit's most recent photographic series, Société de ville, explores the beauty and anxiety associated with the fringes of surveyed urban space. Focusing specifically on those pockets and margins in which nature bleeds back into the built environment like grass through cracked asphalt, his images reveal a connection between the fear of unsupervised urban sites and latent pre-modern superstition. In a mode that recalls the perambulations of Baudelaire's nineteenth-century flâneur, Benoit discovers these sites by strolling observantly around the city. Although rooted in a temporal, experiential approach, the images themselves are disturbingly atemporal and devoid of human presence. He likens this dramatic void to a cinematic shot “after the actors have left the set." In most cases, the viewer is placed in a tangled fringe of woodland, peering out at the monolithic architecture of the city. In other instances, the photographs depict an empty public terrace or some impenetrable, sphinx-like architectural detail. The resultant atmosphere is uniformly mysterious and heady with uncertainty, as if an occult presence were being signaled or traced.

It is interesting to note the literal definition of the word occult, which means “hidden," especially since Benoit has described his photography as “a conscious act, masked." The title Société de ville thus contains a telling jeu de mot: society (société) is at once “the customs and organization of an ordered community" and the artfulness of secret sects or hidden orders. This having been said, determining what does or does not lurk beneath the surface of these images is not as important as the point at which such knowledge becomes impossible, for this is the threshold of poetic imagery and indeed the unconscious. Société de ville thus functions as a metaphor for a kind of urban discontent rooted in the human psyche, what Sigmund Freud once referred to as an “element of unconquerable nature" at work in the background. 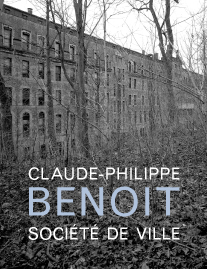