In a rapidly growing world of new technology and electronically disseminated ideas, books have become endangered entities. They are old-fashioned forms in a society that feeds on convenience, archival impulses and a constant desire for instant gratification; in which information travels fast, and at the single click of a button. In this exhibition, artists create tangible forms that demonstrate the book's practical use: to be consumed, absorbed, and eagerly explored by inquiring minds and willing hands. Books become snapshots of a specific time and place, not only in the stories they tell, but through their very bindings and typefaces, even by the distinct telltale aroma that only the most time-worn novels can possess. Here, bound pages are transformed into sculptural objects of curiosity, valued not only for their content, but for the many aesthetic possibilities of reconfigured paper and ink.

Novel Ideas explores the reincarnation of found objects and literary detritus in a collection of bookworks by eight international artists. The featured artists seemingly resist suggestions of rapid technological progression with their more rudimentary approaches to art: acts of slashing, cutting, dissecting and extraction are reductive processes that reveal the presence of newly-appropriated meaning through the very voids they create. Thus, with marks borne from blades rather than brushes, these books become more than just vessels for information and narrative fancy—they begin to exist as physical testaments to their own novel forms and ideas, questioning the way we traditionally consume the written word.

This form of consumption mirrored in each act of physical extraction made upon aging covers and delicate pages demonstrates the ease with which ideas can be manipulated to create alternate modes of visual and intellectual instruction. Classic stories and didactic texts are transformed by acts of selective cutting that leave surprising and new visual narratives. Some texts are gutted and dissected, actively questioning the limitations of scholarly authority, while other artists play directly on the novel itself as a statement piece, with works that are sculpted to reflect their titular properties. Video pieces, on the other hand, present a simultaneous contrast and union of traditional and new media.

These artistic processes recall functions of editing, erasure and censoring, all vital elements in the act of literary creation. But perhaps more importantly, they reflect a constant human need to question, appropriate, challenge and interpret. In Novel Ideas, words are consumed and ideas are released from the bounds of their covers, wholly concrete, and forming new entities unto themselves. Here, books become curious objects of beauty to behold, and a celebration of everything that exemplifies the archaic charm of ink on paper, and of pages turned and cherished. 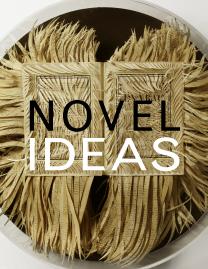