Since 1996, an important part of Michelle Gay's practice has been play with two concepts: language and time. In some works, word-replacing experiments are staged in virtual spaces in which the viewer is immersed. In others, time is the leading element, manifest through the repetition of actions performed by digital figures. It is perhaps the use of language and time—critical in conscious and unconscious formation—that makes possible a technologically produced poetic experience. It is certainly a merger of the familiar in the human body and the uncanny in the machine.

However, unlike some other computer-based works, Gay's interfaces are only partially interactive. Rather than limiting the works, this characteristic opens them up to a hypothetical dimension while maintaining the playfulness that is so common in computer-created art. Both spirited and reflective, these pieces could equally be visual poems or theoretical statements.

In the artist's interfaces, language and time are objectified, engaging the viewer in a sort of sensitive self-reflection, since language and time give meaning to being. She invites a reflection on time and perception and the construction of sense through the most innovative of medias.

However, Gay does not present the machine as all-powerful. On the contrary, the machine becomes fragile before our eyes through the introduction of real time, our time. The machine—the device that has populated and frightened the imaginary of all cultures—is now bound to mortality, tamed. If our time ceases, would the machine still exist? Who would be there to time it? To say that a word is a word, to recognize the stanzas of a poem? To eat words? And, above all, to play?

The artist wishes to thank Colin Gay for sharing his brilliance, and for his continued support. Great thanks also to the Ontario Arts Council and the Canada Council for the Arts. 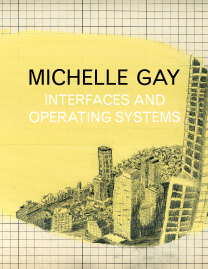