Circulated by the Southern Alberta Art Gallery and the Tom Thomson Art Gallery.

In hunter/gatherer, Toronto-based artist Vid Ingelevics brings together photographs from two of his most recent bodies of work; one of hunting platforms, the second of woodpiles. While both structures are ubiquitous throughout Canada, Ingelevics focuses his lens on those found in the countryside of Grey County, northwest of Toronto.

Such vernacular objects as woodpiles and hunting platforms, called tree stands by hunters, are embedded in the rural landscape in such a way as to become almost invisible. Ingelevics' large-scale photographs capture these provisional and temporary landmarks in a project that draws into tension the paradox of documenting without historicizing, of recording sites of collective memory without disturbing them.

The subjects of Ingelevics' project lie outside official, recorded history, residing instead in the oral traditions and stories that pass within families and communities of people. With no authoritative map documenting the locations of tree stands, and the methodologies of stacking wood bandied about not in the pages of how-to books but in woodlots, yards and kitchens, the photographs take on the presence of a pseudo-record, an unofficial archive and natural history of their own.

In the Ontario of Vid Ingelevics' pictures, the tree stands are used by both urban and rural dwellers for whom hunting is a fundamental part of their identity, way of life, and understanding of the natural world. For many contemporary hunters, the pleasures of the hunt are to be found in the landscape, in wilderness adventure, in the skills needed to scout and stalk, and finally, in the kill itself. To many non-hunters, hunting is viewed as a macho, savage activity best shelved along with other primitive notions of survival. Ingelevics' photographs bring us within range of this contested territory.

While wood heating is no longer necessary for survival in most industrialized countries, many people outside of urban areas have chosen not to abandon their woodpiles in favour of non-renewable resources. Wood burning for many rural people is an integral part of a contained and conserving way of life and the gathering of wood, splitting, stacking and burning of it is an annual, ongoing endeavour. Symbolic of heating and cooking, and the domestic realm of the gatherers, woodpiles unite us with nature in the preparation for winter. Building a woodpile is seen as a time-honoured art. Rituals are invoked, order is made out of disorder. In Ingelevics' photographs, we see them take shape, much like the tree stands, out of specific needs and complex desires as highly individualistic but determinedly utilitarian structures.

The project of hunter/gatherer is a social history, a re-reading of the natural environment, the cultural impositions on it and their meanings. By photographing human activity in the rural environment, Vid Ingelevics contributes in a fundamental way to the still crucial dialogue about representations of nature and the landscape. For an artist who has focused his attention on such quotidian matter, Ingelevics reaches beyond the record into the lyrical space of the oral and informal exchange of knowledge. In doing so, he highlights the vital human experience of survival through social interchange. 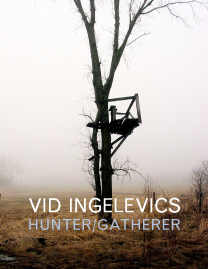