While the search for identity has always been paramount in Lexier's practice, this lost child of the traditional portrait is never going to fit easily into the genre. The artist's portraits of his family are wayward in their subversions of conventional portraiture yet, despite their lack of orthodoxy, Lexier is capable of creating a distinct form in which familial relationships are lovingly expressed. Unlike most portraiture, Lexier does not rely on the appearance of the sitter, but rather on a refined sense of materials that are everyday and familiar. His portraits appear simple, but are deceptively complex. For the artist, it is not a matter of remembering the physical likeness of his loved ones but rather what is remembered in relation to shared events and shared moments. The works in this exhibition are intricately cut, assembled, collected, and hermetically presented in framing devices and vitrines. They are offered as conundrums to be dissected and de-coded, and yet even the questions they symbolically pose can no more be easily answered than the images can be taken apart.

With a cultivated instinct, Lexier is a master of placement regardless of the materials in question. Those materials and objects—few of which involve the artist's own hand but all of which unmistakably convey his sensibility—include a piece of granite and a velvet bag, a cast bronze rope, a calendar, notes to self, and cards with handwritten dates. These works place the viewer in a situation where the systems of substantiation fall under intense review. Each of the objects is steeped in the vocabulary of relationships, positioning us as spectators to the artist's life while experiencing our own Proustian "madeleines."

As a user-friendly Duchampian, Lexier straddles the boundary between art and the everyday. By playing with the bits and pieces of his life—mundane faxes, notes of encouragement, handwritten cards—he recognizes that however banal such materials may be, they are objects and signs capable of expressing and reflecting issues of social identification. He insists on leading us through a maze of images that, step by step, acknowledge bittersweet epiphanies and supportive gestures, and reveal a family of accomplices to his creative process. Frequently he borrows their handwriting by using their signatures, personal marks or selected words—mini-portraits of sorts—that capture wholly distinct characteristics.

Lexier uses the simple pleasures afforded by the vocabularies of minimalism and conceptual art almost as if paring his language to the style of an actuary's handbook. To this, however, he adds a resonance that is reassuringly human. Through his riffs, rules, disquisitions, temporal dislocations, endless connections, and framed analogies, we pulse through a family of separate but linked enigmas. In trying to construct meaning, the viewer is challenged to make meaning out of one's own stories that have similar pitfalls, similar traps and similar impasses. One is left without conclusion but in its stead, a feeling of coherence and devotion. 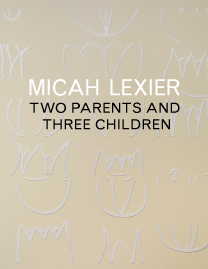