Perhaps the most curious thing about Toronto artist Therese Bolliger's work is its ability to hover right at the edge of familiarity. Although highly suggestive, her work explores the essence of form, consistently evoking shapes that lie beyond the world of objects. And while her practice is precisely defined within theoretical frameworks, the resulting sculptures and drawings are never emotionally rigid. Sensual, vulnerable and bold or playful, disturbing and delicate, the combinations are complex and full of contradiction. Her pieces tug at the imagination on a conceptual, physical and psychic level.

Since the mid-90s, Bolliger's practice has focused on the gaps between image and language, between abstraction and representation and between object and viewer. Occupying the gallery's four spaces, Four Echoes brings together a selection of recent drawings and sculptures. Throughout the exhibition, Bolliger deeply interweaves the two disciplines. Her drawings contain a distinctly sculptural quality: the lack of colour highlights the areas of light and shadow, and her ink washes dry over time, wrinkling the fibres of the paper so that they arch forward into space. Her sculptures are similarly without colour, created with materials such as artificial fur and eyelashes, organically articulated in a manner that resembles the energy and density of a charcoal sketch. Bolliger's contextual references are wide-ranging: from philosophical and mathematical models to the works of other artists whose practice holds special resonance for her. In each instance, Bolliger explores the elusive space between object and concept.

The word choice “echo" in the title of this exhibition is significant. An echo reaches out from its originating object into space. Untethered from its source, it occupies a tenuous state of existence. Bolliger's practice is occupied with these fragile spaces: articulating memory's place between past and present, translating conceptual constructs into form, and exploring the outer reaches of the animate. 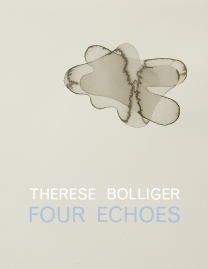