This retrospective of Betty Goodwin's work, drawn from the collection of Salah J. Bachir, provides a condensed overview of the late artist's prolific five-decade career. It underscores her consistent engagement with depictions of the human figure, from her early paintings, to her famous tarpaulins and drawings, to her more recent sculptural work. If, as Goodwin once mused, "it sometimes takes time to understand the completeness of what has been said," then what is it that these artworks have yet to say? How might we decipher their messages differently if we consider her life's work apart from her biography, as a series of distinct yet interconnected attempts at reconciling the potency of images with our fraught attempts to communicate with one another?

From her earliest depictions of the human figure, in portraits such as Untitled (Reclining Figure) (1962), Goodwin investigates the way bodies communicate their charged psychological states. The contorted limbs depicted in her Carbon series, such as Knotted Arms (1988) and Untitled (Figure Animal series) (1987, 1991), suggest a frantic but futile need to communicate across physical barriers. The hazy landscapes in which these bodies float have been compulsively erased and re-worked by the artist's hand, as though the direct act of drawing is likewise an incomplete attempt at communication. In A Burst of Bloody Air (2003), a cloud of murky red liquid comes forth in the place of a voice, subsuming the speaker altogether. In Goodwin's work, to be heard is not just a form of metaphysical expression, it is a matter of life and death.

Communication and survival are also at play in the renowned Swimmers drawings (1981–1986). Goodwin's swimmers struggle against the currents that support them—bodies dive, float or sink in eerie masses of translucent liquid. Over the course of the series, the elegance of limbs moving through water gives way to images of distress and rescue, creating a cumulative sense of unease. In Goodwin's longest series, the Tarpaulins (1974–2000), the poetics of precariousness and loss are made personal and specific. The tarpaulin is transformed into an allegory for the human skin: both bear traces of the movement and life of their contents, yet the materiality of the inanimate tarpaulin underscores the eventual immateriality of the body after death.

Despite the loss that permeates many of Goodwin's works, they also embody a sense of resilience and renewal. The fragile bird's nest floating in a cloudy sky in Beyond Chaos no 1 (1998) represents a life cycle of seasonal change, while the Megaphone series (1980s–2000s) offers a rare vision of hopeful communication, where the human voice is amplified out of its immediate surroundings and into another time and place; it may resonate in the future.

In Goodwin's work, as seen through the lens of the Bachir collection, bodies, messages and locales become unmoored. They haunt one another, and us. 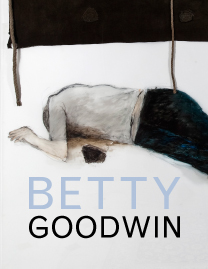