The Sobey Art Award is Canada's preeminent award for artists under the age of 40 with an annual prize of $50,000. For this year's award, Oakville Galleries' Curator of Contemporary Art, Marnie Fleming, had the privilege of selecting the semifinalists for the Ontario region. This exhibition has been assembled to provide a glimpse into the practice of the nominated artists—Aleesa Cohene, Gareth Long, Derek Sullivan, Josh Thorpe, and Daniel Young & Christian Giroux—while also celebrating their achievement. The winner of this year's award will be announced during a gala event at the Art Gallery of Nova Scotia on October 13, 2011.

Josh Thorpe's lyrical pieces are created with simple materials that take their cues from conditions inherent to the location in which he's working. He fluidly mediates the conceptual, material and cultural dimensions of a given site to construct peripheral, unexpected or abstract moments for discovery and extended reflection.

Daniel Young & Christian Giroux, this year's Ontario finalists for the 2011 Sobey Art Award, collaborate on both sculpture and film to explore mid-century modernity, the production of space and the built environment. Their sculptural works combine consumer goods, modernist forms of abstraction and industrial prototyping methods to engage with key ideas in contemporary architecture. 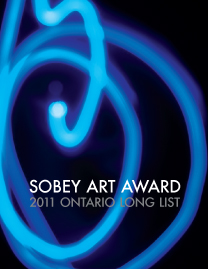