The desire for nature in our living spaces, be it real or stylized, is rooted deep within the human psyche. All cultures-ancient and modern, Western and Eastern-have employed interior decoration that alludes to nature. An Unregarded Art draws from Oakville Galleries' permanent collection to examine some of the ways contemporary artists have engaged with this legacy of the decorative to uncover some rather potent ideologies.

This exhibition takes as its starting point the wooden grapevine frieze in the south gallery of Gairloch, carved in 1922 for the original dining room of Colonel William Gordon MacKendrick. The frieze is an excellent example of idealized nature brought into the home. Architectural details such as this are often classified as decorative art, or that which lies between the fine arts and purely functional crafts. Art historian EH Gombrich once called this “unregarded art," referring to anything from ceramics, glass and silver to carpets, linens and tapestries.

This is an exhibition of objects that make reference to these ostensibly ornamental items, often to imaginative and playful ends. Indeed, over the last two decades Gairloch has proven to be a fertile site for exhibitions in which stylized nature has achieved many things: elucidating notions of class and taste; speaking to issues of the feminine; embodying utopian moments in art history; and addressing the nature/culture divide.

These artworks revitalize overlooked dimensions of the familiar and conventionally received, acknowledging that natural embellishment can be coded with values, emotions and attitudes that extend well beyond mere decoration. 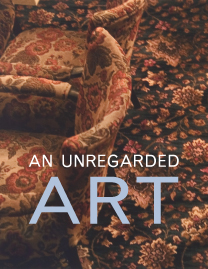