Through his work in sculpture, painting and other media, British Columbia-born artist Sonny Assu looks at identity through the lenses of Indigenous history and politics, consumer culture and social media. Possession focuses on timely questions of value in the context of often-conflicting Indigenous and colonial worldviews.

This exhibition revolves around several sculptural installations, including 1884–1951 (2009) and Silenced: The Burning (2011), which exist as both aesthetically beautiful art objects and compelling meditations on time, worth and waste. Each of these works commemorates the number of years that the potlatch ceremony was banned in Canada—sixty-seven—through an accumulation of objects. The artist's large-scale Longing (2011) project, of which a portion is shown here, takes cedar off-cuts and positions them as masks with distinctive personalities that are uncertain of their status as animate or inanimate, waste product or work of art.

As with much of Assu's work, these projects explore our deep relationships to consumer objects and the increasingly individualized ways that we perform and brand ourselves on platforms such as Facebook and Twitter. In doing so, Assu astutely points to broader ideas of control and self-determination—of resources, culture and history. 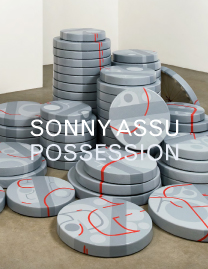