Recipient of the Max Mara Art Prize for Women and a joint recipient of The Turner Prize, British artist Helen Cammock has a multi-disciplinary practice that stretches across film, music, print, performance, and text. For her first exhibition in Canada, Oakville Galleries is showing Cammock's They Call It Idlewild, a film and text installation that considers the notion of idleness, both its potential as a profoundly generative space of creativity and sustenance, and the political misuses, structural power play, and racial stereotyping that surround it.


At the core of the exhibition is a film that was created while Cammock was in residency at Wysing Arts Centre in a rural part of Cambridgeshire in the UK. The film responds to that context as a site and as an idea. Layering photographs and footage taken at Wysing over a highly poetic narrative voiced by the artist, it considers the politics and history of attitudes towards labour and insists on the value and right to idleness for all. Alongside this film are watercolour paintings, silkscreen prints, and a large-scale banner that uses the visual language of workers' protest movements to suggest slowing down—choosing to walk, for example—might be an act of defiance, a gesture against the mindless hurrying of the status quo.


Created just before the pandemic as well as during the first periods of lockdown, these works resonate ever more meaningfully in today's world. Amid the unrelenting pressures of precarious work conditions, widening inequality, and the ongoing persistence of colonial and class-based power structures, They Call It Idlewild calls for a different way of working, one not based on extractive ideologies of production and consumption, but on care, creativity, protection, and solace. 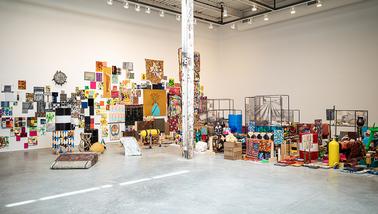 A Many-Sided House is the first exhibition in Canada of work by Wolf Tones (currently Nancy Shaver, Maximilian Goldfarb, Sterrett Smith, Pradeep Dalal, and David Levi Strauss), a collaborative group of US-based artists, convened in 2019 by Nancy Shaver, that has been creating densely constructed installations over the past four years.