The practice of Northern Irish artist Colin Darke is engaged, committed and political. His interests lead him to question notions of language and image, to set up sites of intersection between the public and the personal, between political theory and lived reality.

Born and raised in England, Darke went to art school in the 1970s at Goldsmiths College, University of London. Even as a young artist, he saw strong links between his personal beliefs and his artistic practice. After becoming increasingly disillusioned with Thatcherite England in the 1980s, he moved to Northern Ireland in 1988 to examine British Imperialism first hand, to sort out his politics, and through this experience “to make better art." After ten years he is still living and working there, having figured out for himself the role that art should play in life and politics.

For his exhibition at Oakville Galleries, Darke examines communication through his practice of drawing. He presents, for instance, his own form of 'comms', the secret communications practised by hunger-striking Irish prisoners in British prisons such as The Maze Prison in 1981. Originally a private, concealed note written in tiny script on cigarette paper, these letters were smuggled out of prison (usually by placing them in the mouth and giving loved ones a kiss) and then delivered to the republican leadership on the outside. Darke has adapted the 'comm' format for the aestheticized arena of the gallery. Rather than re-presenting original 'comms' as artifacts, he exchanges the original messages—private pleas for support—with published political manifestoes.

The centerpiece of the exhibition is a wall drawing conceived especially for a non-Irish audience. Directly on the gallery walls, Darke has written in pencil page by page of James Connolly's early twentieth-century book Labour in Irish History. The viewer is drawn-in to the sensual rhythm of the masses of grey script and becomes enveloped by the text. Curator Marnie Fleming writes that with this work Darke “conjures forth Connolly's printed text into the realm of experience as duration and space—accumulations of transformations made in time—with the overall effect having a mesmeric quality." One immediately notes the effort—the labour—involved in this process, and the work thereby takes on a gravity of purpose.

Darke nudges at the boundaries of reading and writing, past and present, public and private, dominant and subordinate. His work conveys a sense of turning things inside out and outside in—to confound the habitual process through which things are perceived and described. 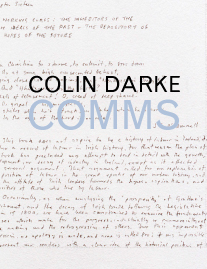