For more than twenty years now, Québec artist Raymonde April has been capturing on film the passing moments of the people and places that surround her. The exhibition Raymonde April: Les Fleuves invisibles/Invisible Rivers proposes a re-reading of the oeuvre as an interdependent whole.

With a documentary code of aesthetics, but a poet's ability to imbue the unpretentious with mystery and meaning, from the beginning April has demonstrated a clear artistic vision. She uses narrative and personal experience to examine the subjects of figure, landscape and familiar objects in her photographs. The work evokes associations between the intimate and the prosaic, autobiographical testimonial and record, transforming everyday scenes and characters into fragile and highly individual experiences. The works take up issues of the presence of the body, the notion of alter-ego and the progressive blurring of self-representation.

Central to the exhibition is the series L'Arrivée des figurants (1997) comprised of thirty-three new and old, black and white photographs arranged in five distinct parts. Like an evocative musical composition, the series has rhythm, melody and harmony in its repeated formal motifs, views of private moments and unpopulated scenes. As in the practice of counterpoint which combines melodies into a complex whole, this series combines images that are different in content, symbolic and emotional weight and relationship to space, but which together form a homogeneous texture. The individual images do not exist in themselves; rather, they transform upon contact with other images.

In an interview with Nicole Gingras for PARACHUTE magazine in 1995, the artist considered the importance of her practice of recycling images. “Going back to what I call ancient images," she explained, “is a bit like giving myself the possibility of returning to an age of innocence: the innocence of images, their speed, their fluidity. Looking at these images taken many years ago, I now realize that they were shot in an unconscious and innocent state. I think that at that time I was working very hard at creating images without knowing that I was developing a formal language of my own. …For me it's a way of looking at the passing of time."

Raymonde April: Les Fleuves invisibles/Invisible Rivers not only pays homage to a photographer whose wealth of vocabulary remains uncontested, but signals the acuity of a certain vision cast upon beings and things that transforms our relationship to the world.

Organized and circulated by the Musée d'art de Joliette, Québec 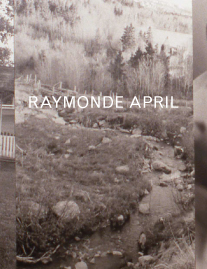