Peter MacCallum is well-known in the Toronto area for his unglamourous, scrupulous observations of industrial and urban architecture. His documentary studies of the concrete industry, completed over the last few years, show the complex structures of cement plants as sculptural forms in the landscape. In MacCallum's photographs, these accidental monuments of industry are quietly overwhelming; they have an undeniable presence and an evocative power.

The subject of Peter MacCallum's exhibition at Oakville Galleries is a series of photographs documenting the Ring-billed Gull, or Larus Delawarensis, a common bird species that most of us are familiar with but have never paid attention to. Rather than see the birds as garbage-eating pests, MacCallum prefers to see these largely misunderstood gulls as “athletic, swashbuckling rogues." The artist began the Larus Delawarensis series in his neighbourhood on Augusta Avenue in Toronto, then moved to Nathan Philips Square, and finally moved to the site of a gull colony at the St. Mary's Cement Plant in Bowmanville, Ontario. This exhibition is a contribution to the social history of the gull which, since the nineteenth century, has been greatly affected by the social history of humans.

In these images, we see a tender, ludic quality seldom revealed in MacCallum's work––yet there is nothing sentimental about this series of photographs. He allows us to look––simply look––at gulls with amazing intimacy. These birds aren't just subjects for MacCallum; they're characters. We sense the photographer's exhilaration with his close observations. His disciplined eye makes us sit up and take notice of these creatures with a mixture of wit and wonder. 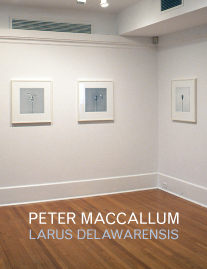